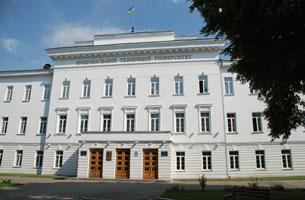 The Central University building, an architectural monument from the first half of the 19th century (Classic style, which is part of the ensemble of Poltava Empire style), was built in the years 1828 to 1832 by St. Petersburg and architect Ludwig Charlemagne as premises for the Institute of Fine Panels.

It was founded December 12, 1818 by the wife of the governor-general in Poltava and Chernihiv provinces MG Repnin Barbara Institute of Fine Pann in Poltava and became the first provincial cities of the Russian autocratic empire secondary educational institution closed for women. Over the hundred years of the institute's maiden it at different times the outstanding figures of the Ukrainian, Russian and Czech cultures. In particular, more than 36 years have constant supervision of academic work known Ukrainian poet and fabulist, a former rector of the Kharkov University, Professor PP Gulak-Artemovskij.

In January 1918, the Institute of Fine Pann evacuated to Vladikavkaz, where it initiated the establishment of urban girls' school. From 1918 until 1930 in the central building of the former institute located land surveying college, an orphanage, school gardening and other institutions, organizations and institutions. In 30 years in the newly established system of higher education designed to provide rapidly increasing need of engineering personnel for the huge construction site that it is the whole of the USSR, Poltava became union training center for agricultural engineers building. According to the decree of the Soviet government on 23 July 1930 at number 237 on the establishment of new universities, Commissariat land of the Ukrainian government issued August 19, 1930 ordered the formation of Poltava Agricultural Institute building. The rich agricultural traditions and achievements of Poltava in 1920 prepared in Agricultural Institute (Faculty of Agricultural construction) frames for the village.

It is this faculty decision Poltava City Council moved to the premises of the former Institute of Fine panel - Pershotravnevyi Avenue, № 24 (central three-storey building and two-storey side, not connected to the central body), which was the location of the new university. Among the first instructors - graduate of the Kiev Polytechnic graduate outstanding scientist-engineer E. Paton - MS Toryanyk who founded a scientific school reinforced the institute, EV Platonov - Graduate Institute of Railway Engineers in Petrograd founded a scientific school of basics i foundations; former provincial architect of Poltava TJ Hardasevych - founder of scientific school of architectural design, social discipline in the institute taught OK Kasymenko, S. Danishev - subsequently known native historians. In the years 1933 to 1934, a part of our school faculty connected farm building Saratov Institute of Agriculture building along with 200 students. From 1934 the library of the Institute was headed south veins - a teacher by profession, poet by vocation. In 1938 he was arrested and executed by the decision of a special three NKVD in Poltava oblast common in those days, the charge of "anti-Soviet propaganda." Despite the losses experienced in times of famine and repression, Poltava Institute of Agricultural Engineers build confidence overcame its first decade. Number of departments in the institute grew, and in 1940 it was already 20 (mathematics, physics, chemistry, graphics, theoretical mechanics, structural mechanics, construction materials, construction industry, etc.). The institute trained more than 500 students.

For the first ten years of the prewar educational activities staff of the Institute has trained over 800 graduates - engineers for the village. Since the beginning of the Great Patriotic War, June 22, 1941 on the shoulders of teachers and student staff, administration institute lay heavy burden of responsibility for the evacuation team in Uralsk far. Graduate engineers, teachers, men were mobilized to participate in battles with the Nazis. Students continue to study, care for the wounded, stocked fuel. October 19, 1943 staff of the Institute returned to Poltava, that they had to be just as ruined building institute. The first postwar decade teaching students the teachers i worked in adapted premises at street 8. Along with rebuilding the destroyed building of the Institute of Engineers of agricultural building (from 1961 - Engineering Institute) grew i matured collective institution, strengthened and developed its material base. During the 1954–1971 years, opening up new departments, industrial and civil engineering, architectural, sanitary, technical, correspondence with evening offices, training, the efforts of the administration at that time organized construction of the lab, right i left buildings, new dormitories for students. During these years successfully operated student design office, created in 1930.

In March 1992, the team was reformed institutions of mono-profile Building Institute, which trained six specialties, the University of the training of specialists in 26 areas: economic, electromechanical, environmental, architectural, construction and so on. Diligent work of all the faculty of the school in preparing educational programs and business plans, training of laboratory i logistics, scientific and technical literature created preconditions for its successful accreditation for the fourth, the highest, international level and rename it according to the decision of the cabinet Ukraine on August 29, 1994 at the Technical University, and in accordance with a presidential decree Ukrainy number 302/2002 on 27 March 2002 granting it the status of national. Later, in March,1992 the was reformed.